Visitors to former quarry in Chinnor told to stay away

People have been trespassing on a former quarry and swimming in its “highly toxic” water pools.

Mr Howell said “gangs” had visited the fenced off site “without any concern for social distancing”.

Owners of the former quarry Taylor Wimpey said it had deployed security guards with dogs to patrol the site. 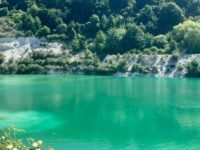 A spokesperson told the BBC it shared concerns with residents that people were “illegally accessing” the land and said it was “carrying out daily fence repairs”.

They said a small part of the site, which has been owned by Taylor Wimpey since 2010, is a publicly accessible nature reserve and the remainder is fenced off with warning signs.

The quarry’s steep edges and deep water in its fenced-off section, named by locals as the “blue lagoon”, presented a “number of health and safety risks”, a statement said.

Thames Valley Police warned the water, which contains high alkaline substances, was “highly toxic and can cause serious health issues”.

Mr Howell said it was “absolutely appalling” that “gangs of people were out trying to make merry without any concern for social distancing” following the easing of the coronavirus lockdown measures.

A police spokesman said it was working with the landowner to “disperse those who have accessed the site”.

“A Section 34 dispersal order is in place and will be enforced where necessary to tackle anti-social behaviour,” the spokesman said.