The Mayor of Aylesbury invites residents to enjoy an afternoon of music with Aylesbury Concert Band.

Aylesbury Concert Band will be performing ‘A Year of Celebrations’ on Saturday 9 April at St Mary’s Church in Aylesbury marking the Queen’s Platinum Jubilee, celebrating the works of Sir Andrew Lloyd Webber’s Phantom of the Opera and other British music icons.

Musical director, John Brown, will be making his debut with Aylesbury Concert Band. 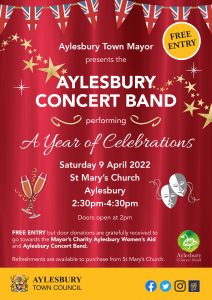 The Mayor of Aylesbury, Cllr Anders Christensen, said: “I look forward to welcoming you to this event after two years of uncertainty and many events being cancelled. The event is free for all to attend however donations would be gratefully received on the door. These donations will go towards my chosen charity of the year, Aylesbury Women’s Aid and to Aylesbury Concert Band.

“The afternoon is set to be one to remember, featuring Bernstein’s West Side Story, Queen in Concert and music to mark the Queen’s Platinum Jubilee. I hope you can come along and celebrate with me.”

A Year of Celebrations concert takes place at St Mary’s Church, Aylesbury from 2:30-4:30pm on Saturday 9 April. Doors open at 2pm. Refreshments are available to purchase and donations are very welcome.