Thame United today paid tribute to ex-player Chris Potter who sadly died last week after an illness of several months. The team’s Facebook page says “You will be greatly missed and our thoughts are with Chris’ friends and family at this time.”

Joining the Red Kites from Oxford City for a fee of £1,700, he played throughout the 90’s and until 2002. He was regularly in the goals and was and Oxfordshire Senior Cup Winner for Thame United in 2001. He was a popular player known for his speed and ability to get forward. However, Andy Sinnott, the then Thame manager was unable to offer him a regular first team place and Chris decided to move on.

In 2002 he moved to Abingdon Town and added considerable strength to their team in their attempt to avoid relegation that season.

Chris joined Banbury United in November 2003. He was a popular player at the club, not only with his teammates but also with supporters in a two-year spell to November of 2005, playing as a left winger, making exactly 100 appearances for the club and scoring 20 goals. This included playing in one of the club’s 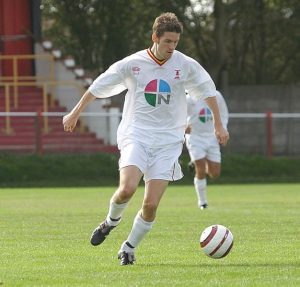 biggest games in their history, the memorable play-off win over Sutton Coldfield at the end of the 2003/04 season that saw Banbury promoted to the Southern League Premier Division for the first time. Ex-teammates Simon Tricker and Ashley Stevens gave tribute to Chris with Simon saying “Not only did Chris light up on the pitch. To most of us in the dressing room he was a ray (of) light. Never forgot pottsy. Now light up the sky mate.”