It was as a cold but dry afternoon in Thame for this match. For those that have forgotten, these two sides faced each other twice last season in the FA Cup with Leighton Town victorious at home in the replay.

Thame have been an attacking force in pre-season netting sixteen goals in just 5 games, however, they have conceded twelve goals in those same games.

This was another match to experiment more and gain fitness. 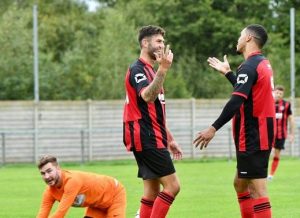 For the coaching team it’s this sort of time when a starting XI becomes clearer with the first match just two weeks away in the FA Cup.

Thame opened the scoring when Gledhill poked in from a few yards out. The home side extended their lead when Goss was one on one and unselfishly squared the ball for West to put home.

Leighton showed great fight in the second half and scored through a penalty kick.

Thame had a penalty of their own after a foul on Lynn. Ryan Blake’s spot kick was saved to create some late drama.
Leighton equalised with a 90th minute header much to the dismay of the crowd.