Aylesbury’s new Mayor was made at Aylesbury Town Council’s Annual Meeting on Thursday 20 May at Quarrendon and Meadowcroft Community Centre.

Cllr Anders Christensen has been elected as Town Mayor who expressed his delight and honour to represent Aylesbury Town. 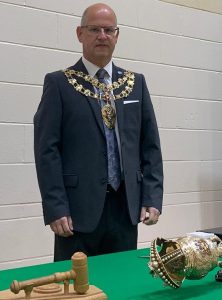 He said: “It is an amazing honour to be given the opportunity to serve as Mayor for Aylesbury. I moved here a little over 20 years ago and continue to be amazed and delighted by the fantastic people I meet in the town.

“As we, hopefully, come out of lockdown, I hope to be able to host the town’s great public events in the coming year and help promote the valuable work of local charities.”

Cllr Christensen takes the place of 2019-2021 Mayor of Aylesbury, Cllr Mike Smith, who has been part of Aylesbury Town Council since 2001.