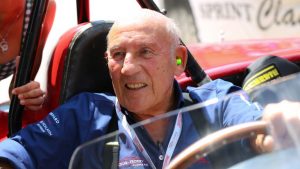 He is widely regarded as one of the greatest Formula 1 drivers of all time, even though he never won the World Championship.

Moss retired from public life in January 2018 because of ongoing health problems.

He became the first British driver to win a home grand prix in 1955 at Aintree,narrowly beating his illustrious Argentine teammate Juan Manuel Fangio.

Formula One team Williams for sale?