Five local MPs have expressed their “surprise and disappointment” that the Department of Transport have issued a Notice to Proceed in the midst of the coronavirus crisis. The state that although the Prime Minister stated in February that HS2 would go ahead, the world had change since then.

They argue that the business case published by the DfT on Wednesday does not taker into account the impact of COVID-19 whilst at the same time acknowledging that passenger demand for the project has diminished. 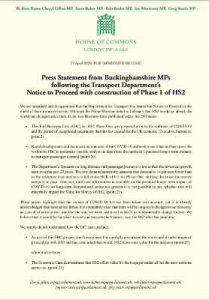 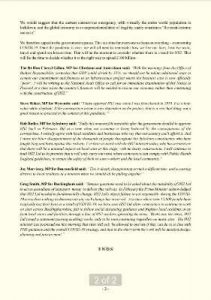 Rob Butler MP, MP for Aylesbury said that he was saddened by the decision and that he entirely agreed with the ;local residents and businesses in saying that this was a project that the country could no longer afford. He went on to re-iterate that he expected HS2 to comply with its promise to only work where contractors could comply with Public Health England guidelines to ensure the safety of both its own workers and the local community.

“The opposition of local councils and communities across Buckinghamshire to this ill-conceived project has been unwavering.
To give the go ahead to HS2 in the middle of the current global pandemic and without considering the priority and viability of this project in the wider context of a UK economic recovery strategy is difficult to comprehend. It would appear that this announcement has been made at an opportunistic and inappropriate time, to avoid proper scrutiny”