Supermarket Iceland is on the back foot after telling NHS workers they must buy anything they handle and not put it back on the shelves.

The chain has now offered an apology after a huge online backlash to the guidance it posted on its website. 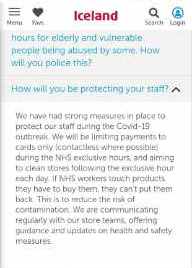 Posts appeared accusing the company of suggesting that NHS workers were dirty or disease ridden. As one person put it in her response to Iceland. “NHS workers know better than anyone about infection control.”

Iceland responded that the original instruction had been posted in error and they explained how grateful they were to all of the NHS and key workers for the work they were doing. It also said that new instructions would go out to all stores immediately