ZSL Whipsnade Zoo’s giraffe herd welcomed a giant six-foot-tall new arrival this week – on what has been dubbed ‘the day of hope’ by staff at the UK’s largest zoo.

The female calf was born at the same time as the first COVID-19 vaccine was given to 90-year-old Margaret Keenan, during the early hours of Tuesday 8 December – and in recognition of the poignant moment, the infant has been named Margaret.

Following a 15-month gestation period, Margaret is the second calf to be born to mum Luna, adding even more meaning to that ‘day of hope’ as it is a hugely positive boost for the population of her species – which are officially classified as Endangered in the wild. Margaret is a reticulated giraffe (Giraffa camelopardalis reticulata) and was born as part of the international conservation breeding programme (EEP) for the species.

Team Leader Mark Holden said, “2020 has been a challenging year for the world, and the arrival of our precious giraffe calf on the same day – and actually at the same time! – as the much-anticipated COVID-19 vaccination was first administered feels like a real moment of hope – and one we are so keen to celebrate and remember. 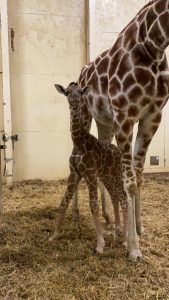 “Here at ZSL Whipsnade Zoo we have keenly felt the pressures caused by the COVID-19 pandemic, we and our sister site ZSL London Zoo, were forced to close for a total of 16 weeks each, putting huge financial strain on our charity and our global conservation efforts.”

It costs 10,000 a month to feed and care for the giraffe herd at Whipsnade alone. Income from visitors to London Zoo and Whipsnade Zoo and donations to the conservation charity ZSL (Zoological Society of London), which runs the Zoos, is vital in continuing the world class care which the new giraffe calf and the 20,000 other residents of the Zoos, many of which are also endangered. The charity also undertakes conservation work with threatened species and habitats around the world. ZSL and its Zoos lost almost £20 million due to closures and caps on visitor numbers during the COVID pandemic and has launched a fundraising appeal at www.zsl.org/donate.

Giraffes give birth standing up, meaning youngsters are welcomed to the world with a two-metre thud to the ground. Zookeepers maintained a close watch on mum Luna throughout her pregnancy and prepared a deep layer of bedding when they knew birth was imminent. A close-knit family, the rest of the herd were waiting close by to give mum reassurance and support. 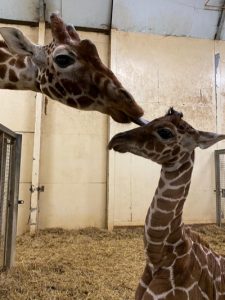 Margaret took her first wobbly steps within an hour of being born, and has been suckling well from mum Luna, who has continued to take motherhood in her stride.

Mark Holden continued; “Just as the first vaccine has given people across the UK new hope, our new arrival brings new hope for this endangered species. With fewer than 9,000 individuals living in the wild, this little one’s arrival is a vital boost to the numbers of this Endangered species.”

“We very much hope that Margaret Keenan, will be able to come in and visit her namesake one day soon, so we can introduce them in person!”