Ex Red Kite Radio presenter Dan Blaze was one of those recently recognized by the Mayor of Aylesbury for his work in the community during the pandemic.

The Mayor of Aylesbury has awarded three residents with an award of appreciation after going above and beyond and supporting the Aylesbury community during the pandemic.

Dan Blaze, Marie Biswell and Vicki Parker have each been awarded with a certificate of appreciation to honour their dedicated and compassionate work.

Three other residents were recognised in September 2020, but eight months and another national lockdown later, three more residents have been noticed by the Town Mayor, Cllr Mike Smith.

He said: “I am delighted to recognise these individuals who, for the last year, have been inspiring and supporting our community during a very difficult year.

“Recently I did a Zoom interview with DJ Dan Blaze to celebrate the one-year anniversary of his weekly community TV broadcast. This is aired every Monday to care homes and others in isolated situations across the Aylesbury area – working in particular with the Gateway Club and their members. There are music requests, birthday dedications and karaoke but, most importantly, the broadcasts have kept spirits high in a fun, friendly and safe atmosphere. 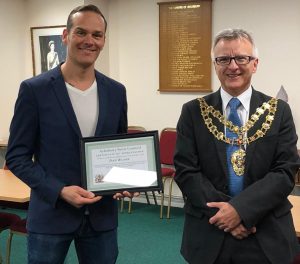 “I thank Dan for giving his time and commitment to carry out such an important line of communication to those who may not be able to socialise with their own friends and family.”

Marie Biswell from facebook.com/HandTalking was also awarded with an appreciation award at the Town Hall.

Cllr Mike Smith said: “Marie is a sign interpreter and has signed at many Town Council events. She even supported Glastonbury before 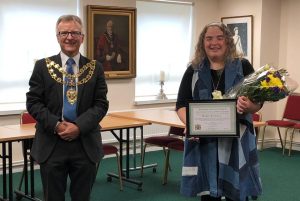 lockdown began. Over the last year, Marie has entertained so many by signing much-loved stories, songs and has even had time to fundraise for local charities. Marie is an inspiration, especially to those within our deaf community.”

Cllr Mike Smith said: “There are of course many volunteers and professionals at the Stoke Mandeville Stadium who have worked tirelessly over the past five months. I would like to take this opportunity to thank you all. To those who greet you as you walk in, to the vaccinators, nursing staff and volunteers inside the Hub, for all your hard work and commitment in providing this vital service to us all – thank you.

“I am pleased to recognise Vicki Parker as one of our Community Stars. Vicki coordinates all the vaccinators, pharmacists, and most importantly the teams that contact the patients to invite them to their appointments. She ensures that as many vaccines are administered as possible and that not a single dose of the vaccine is wasted. 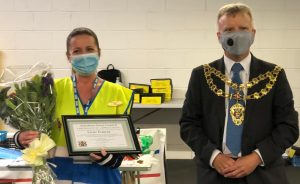 This often involves rearranging appointments to accommodate those who may turn up on the incorrect day. She does this on top of her ‘day jobs’ of strategic management of three practices. Her dedication to ensuring that as many people receive their vaccine as soon as possible is outstanding.”

This is the last Mayoral engagement with Cllr Mike Smith as Town Mayor who has been Mayor since May 2019. Aylesbury Town’s new Mayor will be made on Thursday 20 May 2021.