Bob Dylan has become the oldest artist to reach number one in the UK charts with an album of new material. 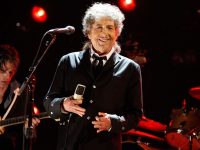 The singer-songwriter’s 39th album, Rough And Rowdy Ways, made its debut at the top with 34,000 chart sales, including 29,000 purchased on CD.
The record reached number one 56 years after Dylan first topped the charts with his second studio album The Freewheelin’ Bob Dylan.
At the age of 79, Dylan surpasses Paul Simon, who was 74 when his album Stranger To Stranger went to number one in 2016.
The oldest artist overall to reach the summit was the late Dame Vera Lynn.
The Forces’ Sweetheart was 92 when she hit the top spot in 2009 with her greatest hits collection We’ll Meet Again. Her centenary album 100 has now re-entered the top 20 following her death last week.

The artist in the #2 position currently is Neil Young – who is only 74!