Captain Tom – what a star

Originally he wanted to raise £1,000 to thank his local hospital for looking after him so well after cancer and hip surgery, but the 99 year old has set a stunning one man record by raising over 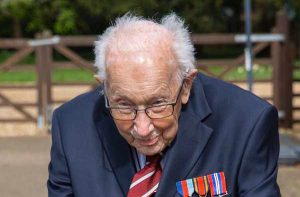 Over half a million people have contributed to support his walk of 100 times around his garden before he reaches his hundredth birthday.

Money raised for NHS Charities Together will pay for care packs for staff, electronic devices for patients to keep in touch with family members and support groups for those recovering from coronavirus.

Cpt Moore has achieved the highest total raised by an individual on JustGiving.